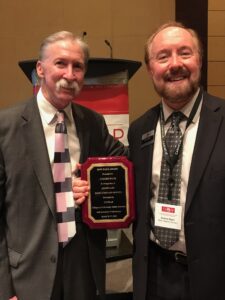 Awarded annually to a CUPRAP member who has significantly contributed to the organization. The award is named in honor of Don Hale, CUPRAP ™s second president, and for 20 years thereafter, editor of its newsletter.

Anders Back has lived in the Philadelphia region for most of his life and holds undergraduate and graduate degrees from Antioch College and the University of Pennsylvania. He was an opinion page columnist for the Montgomery Newspaper Group and did film and theater reviews

for media owned by the Journal Register Group and later for 21st Century Media for over 25 years.

Few (probably none) will recall that he also served as the spokesperson for all herbaceous and woody plants and their caretakers when he was Director of Communications for the American Public Gardens Association, or APGA,  which has over 10,000 members representing over 600 institutions, arboretums, parks and zoos in the U.S. and 20 other countries.

He attributes his ability to review his career through rose-colored glasses to the time he spent working at APGA.

He thinks it was 1984 when he joined CUPRAP, and despite everything he still believes that two plus two equals five. This is particularly true when he ™s buying drinks for colleagues. The decision to move the Annual Conference from Hershey to Lancaster was made during his presidency, and he has no regrets – well ¦maybe one or two, like no more free parking and no Circular Dining Room buffets. But he ™s glad we are here in the nation ™s first capital (look it up if you don ™t believe it). As the Amish say, œif you want your place in the sun, you ™ll have to expect some blisters.  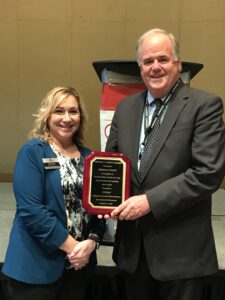 Tom Foley, President of the Association of Independent Colleges and Universities in Pennsylvania, has held leadership positions over the last four decades in four fields: education, workforce development, volunteer service and public policy. He is the author of over 150 published articles on a wide range of subjects and was keynote speaker at more than 500 events here, in Ireland and Northern Ireland. He has testified

more than 50 times before governmental and legislative bodies in Harrisburg, Belfast, Dublin and Washington, chaired 10 statewide Boards and Commissions and served in state and national leadership positions in voluntary service, education, workforce development and public policy.

As educator, Foley is a first generation college grad–thanks to scholarships from Dartmouth College, University College (Dublin, Ireland) and Yale Law School and holds an honorary doctorate (jointly, with his wife Michele) in Humane Letters. As President of the United Way of Pennsylvania, Foley was a key leader in the effort that led to the first PA public investment in pre-school education and is currently co-chair of the Governor ™s Early Learning Investment Committee (ELIC). He served almost a decade as President of Mount Aloysius College (named by the White House in 2015 as one of four œEngines of Opportunity  in the country for its work with low income students), has lectured at more than 40 colleges and universities and is now President of AICUP, the association of 90+ independent non-profit colleges in PA. 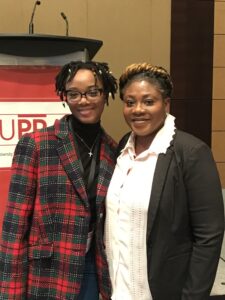 Dzifa (Ge-fah) Lassey is an aspiring Illustrator and graphic designer, born and raised in Maryland.

She is currently a sophomore at Pennsylvania College of Art & Design with a 3.87 GPA and is their student council president.

In her pastime, she enjoys skateboarding and printmaking.

According to Dzifa, “I am passionate about my education in the visual arts.

I have realized graphic design is about giving to others.  Designs that designers create can help small businesses, can be used to inspire children to read, and can be used to promote clean energy. I strive to be a designer who will change our world.” 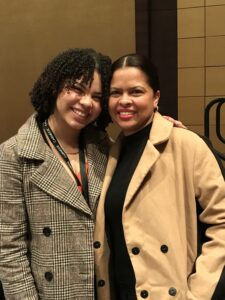 Thania DeJesus, Albright College class of 2021, is a first-generation, Latina college student and soon to be the first college graduate in her family. She will also be earning minors in Spanish and painting. She studied abroad in Spain in 2019 where she was a Mobile Journalist (MOJO), and then after coming back, became an Ambassador for Cultural Experiences Abroad (CEA). She held down four jobs while earning her two degrees and is a-board member to the World Affairs Club, and the Visual Arts Organization, as well as a contributor and member of the Arts Magazine at Albright.

According to Thania, œ I want to see more representation of Latina women in the communications field and hopefully be of inspiration to those who come after me. I hope to open my own public relations firm in the future that will focus on helping small Latino business owners so they can excel in their particular business. 