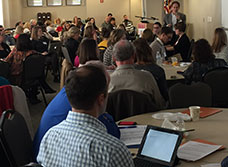 CUPRAP is a voluntary organization of communications professionals from colleges, universities and independent schools dedicated to advancing the understanding of higher education and enhancing the professional development of its members. CUPRAP members work in public relations, media relations, marketing, publications, sports information, web and graphic design, and more. Members come from private and public colleges and universities, junior colleges, community colleges, independent schools, as well as other organizations involved in higher education. Founded in Pennsylvania in 1980 as one of the nations few statewide organizations, CUPRAP members now come from many states. Today, CUPRAP has nearly 350 members from 100 institutions.