According to Elizabeth, œIt is amazing how similar our two organizations are. Their membership consists of higher education communicators from private and public institutions across the state and they are super-friendly and readily share ideas and resources. OCPRA ™s three-day conference includes an awards presentation dinner for their CUPPIE-like competition, a scholarship, a Rising Star award and plenty of socializing and networking.   They also host a one-day workshop in the fall. 

OCPRA was founded in 1969, launched their summer conference in 1980, and awards for creative excellence in 1992.  Until 2012, neither organization was aware that the other existed.   In that year, OCPRA board member and past president, Adam Calaway, was searching online for organizations similar to his and the only one in the U.S. that seemed to have a similar mission and make-up was CUPRAP.   He called Elizabeth to see if she would be able to get several CUPRAP members to judge their awards competition and a six-year-and-counting collaboration ensued.

œWe have continued to serve as judges each year for the OCPRA awards competition,  explained Elizabeth, œand they have served as judges for some of the divisions in the CUPPIES. Board members have also attended each other ™s events.  We always get great session ideas from our Oklahoma friends and we are hoping that a couple will be traveling to Lancaster to present at our event next March.  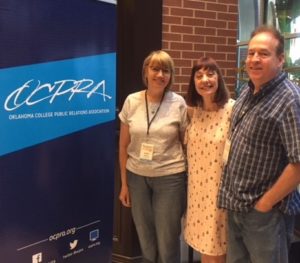